We arrived in Delhi last Thursday from Mumbia via Indigo Air. There are a number of airline choices for inter-India travel. I remember when Indian Airlines was the only the game in town, now this is not the case. The plane was new, super clean, the service was great, the chai was good and plentiful and the snacks (available for purchase) were pretty affordable and appeared decent quality.

Our first three nights in Delhi we stayed with family. We didn’t do much in the way of formal sightseeing, aside from visiting Akshardam (an amazing Swami Narayan temple) and viewing the city by car as we drove here and there to see family, friends and such. You’ll see a photo of Akshardam below that looks totally fake, but it isn’t, the temple really does look that impressive. They don’t allow cameras so I had to photograph the shot they made of us.

We also took part in a surprise birthday party for my cousin. I included some photos of the food being prepared (including roti made in a special tandoor style oven).

On the fourth night we moved to a hotel and joined a tour group for a 15 day jaunt around Rajasthan, Delhi and Agra. Our first day of the tour we went to the Great Mosque (Jammu Masijd, made by Shah Jahan, the same person who constructed the Taj Mahal), The Gurudwara Sikh Temple (the one where Guru Nanak’s head was supposed to have fallen), Humayun’s Tomb and the Qutb Minar. At the Sikh Temple we got to see the kitchen where they prepare massive portions of food that is offered freely to devotees (anyone is welcome). Some pics included below.

Due to preparations for the Independence Day celebrations we were not able to get close to the India Gate or government buildings. Many of the  museums were also closed (it was a Monday, many shops and tourist spots close on Mondays) so we will catch those sights when we return to Delhi in a few weeks.

Out of the things we saw in Delhi, Akshardam Temple and Qutb Minar were the most remarkable.

We are currently three days into the tour. More info about that in another post.

Delhi is very different from Mumbia.
* The weather is much colder in the winter. It was 45 degrees our second day there, the coldest day of the year so far. I was cold despite wearing a thin down jacket and wool sweater. Contrast this to 90+ temps in Mumbai.
* There is more stuff to see, in my opinion, with large ancient monuments, governmental buildings and landmarks, museums, etc.
* The shopping is great, as there is a wider array of Indian handicrafts and things to buy (most of which is from Rajasthan).
* Things are more spread out, and the traffic, while still terrible, isn’t quite as bad as Mumbai.
* There is a metro system that is on par with the London or Paris metros (and surprisingly clean). It’s pretty easy to get around using the Metro.
* There are waterbuffalos, and they are apt to cross the street whenever they choose (perhaps they are in Mumbai somewhere, but I didn’t see them!).
* Puppies!!! There are street dogs everywhere in India, but we saw many more puppies in Delhi, particularly around the monument areas. I think this was more due to the weather and the presence of grass and open space than anything else I’ll be including gratuitous photos of puppies on the blog whenever possible.

Below some shots of Delhi and a variety of sights as mentioned above (the first one is my cousin’s dog “Choco”): 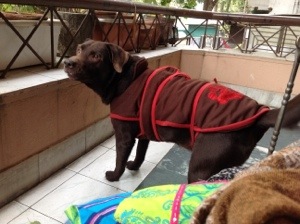 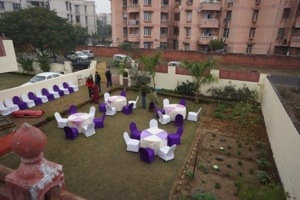 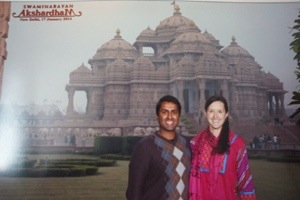 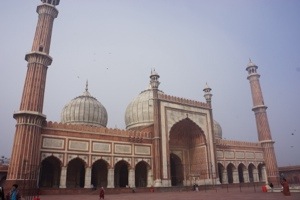 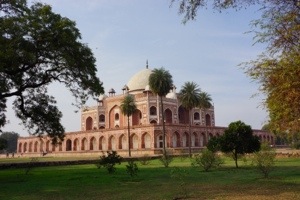 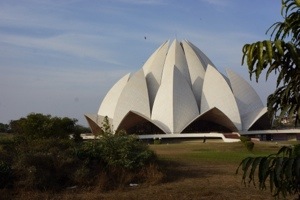 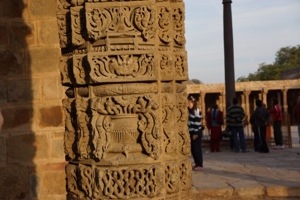