From Singapore we headed northwest to Kuala Lumpur, a modern city that serves as a hub for trade across southeast Asia, much the same as Singapore.

To get there, we opted to take a train. This was a cheaper method of travel and we had heard that they were very comfortable. We made the trip during the day (instead of taking a sleeper train). In India, we learned that unless you have a private bunk, sleeping on a sleeper train is impossible with all the snoring and rustling around people do. The seats were plush and wide, like business class seats on an airplane, with food service along the way (though not much vegetarian food, we brought our own).

To save more money we took a Singapore train to the Malaysia boarder, then hopped on a bus to cross the boarder, then another bus to a nearby city and finally….the train bound for Kuala Lumpur (KL)! Doing this resulted in a train ticket in first class ticket costing less than $20 USD / person all the way to KL, and eight hour journey. The exact same train would have cost three times as much if we caught it in Singapore. We weren’t in a rush to get to KL so this all made perfect sense to travel like this….until the train stopped moving.

About four hours into the ride, the train stopped for a long time at a small village station. It was only 20% full and there weren’t many English-speaking tourists around. No body was communicating info about what was happening (a common trend during our travels in Asia so far). Finally, after not moving for about three hours, I got off the train and saw some large tourist buses pull up. Turns out there was a fire on the tracks up ahead, and they were going to bus us all the way to KL!

By this time we were tired and hungry (it was close to 6pm) and non of the little snack shops had any vegetarian food. We boarded the bus (which was super nice, one of the nicest buses we’ve ever been on!) and about four hours later arrived in KL, and made our way to our Hostel via taxi (it was late, taxis are cheap in KL and we didn’t want to risk public transit at this point).

Our Hostel was highly rated on Hostelworld.com and we soon learned why. It was right in the heart of the club district. Despite being close to midnight, there were a lot of people out and the music was loud and thumping. This is great if you are in KL to party…we were not.

Unfortunately, our private room (another luxury we splurged for) at the hostel shared a wall with a night club, and we were massaged to the bass-induced vibrations of the disco until 5am. It was not pleasant and the next day we cancelled our planned stay for another night and moved into another Hostel a bit further from the noise. This one, called The Container Hotel, was made entirely from shipping containers and large concrete pipes. It was ultra modern and comfortable (albeit a little claustrophobic with 8 dorm rooms and a bathroom crammed into a single shipping container)!

KL (as locals refer to Kuala Lumpur) was very different from Alison and I expected it to be. We thought it would more like a large Indian city – with noise, crowds, bad traffic and general disorderliness. However, it far more comparable to Singapore, with clean streets, modern shopping complexes and high rises, and aside from the club district – orderliness.

KL is a major shopping and fashion hub for the region – and there was no shortage of high or low-end fashion….with plenty of malls. The malls were more interesting than the US, particularly due to the elaborate food courts with fairly priced and very fresh food – often with plenty of vegetarian options. We wish food courts in America were like these!

Another oddity in KL is the Petronas Towers, once the tallest buildings in the world, they dominate the skyline. We decided not to deal with the crowds (and the overpriced ticket) to go up to the linking bridge connecting the two towers, and enjoyed the views looking up from down below. At night they are lit up well, and behind the towers are nice water features and a massive park.

In general, KL is landscaped nicely, with tall trees and manicured gardens. We took a hop-on hop-off bus our first day there to get a lay of the land. We ventured around China town and Little India, and saw one of the main Hindu Temples. There is a large Hindu population in Malaysia, though it is a predominately Muslim nation.

Aside from this, we spend our time wandering about the streets, going for short runs and hunting for good vegetarian food, which was easy to find even though most Malay food has seafood hidden in it somewhere. The public transit system – particularly the trams/trains are exceptional and easy to navigate as a tourist.

Our main excursion out of the city center was to the Batu Caves, a large network of caves turned into a Hindu temple. We arrived there by train in the heat of the day (it was in the low to mid-90s, sunny and humid most days in KL) and walked up the roughly 300 steps to the cave. Inside, they had temple areas for puja, and one of the caves at the base of the mountain had a large series of dioramas showing the Ramayana and Mahabarata stories. It looked like most people were coming here to take photos and not much worship was happening.

From KL we decided to head to Phuket Island in Southern Thailand, a short plan ride away. Despite its notorious reputation as a noisy and dirty party capital of southern Thailand, we wanted to see it for ourselves and make up our own minds. We know from our travels so far that things you hear or read about don’t always  turn out to be true. We wanted to make our own decision. We also wanted to explore some of the small islands off the Andaman (western) coast of Thailand. 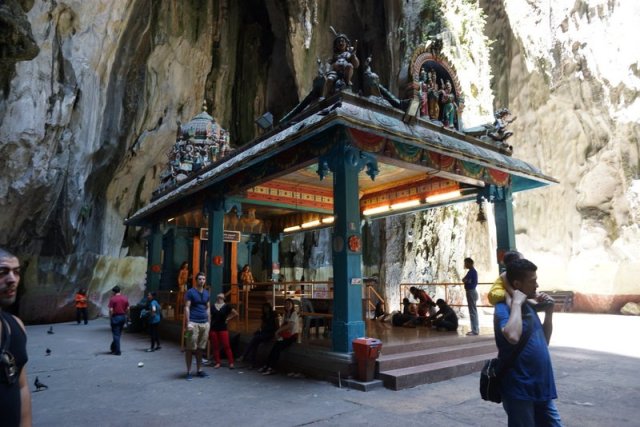 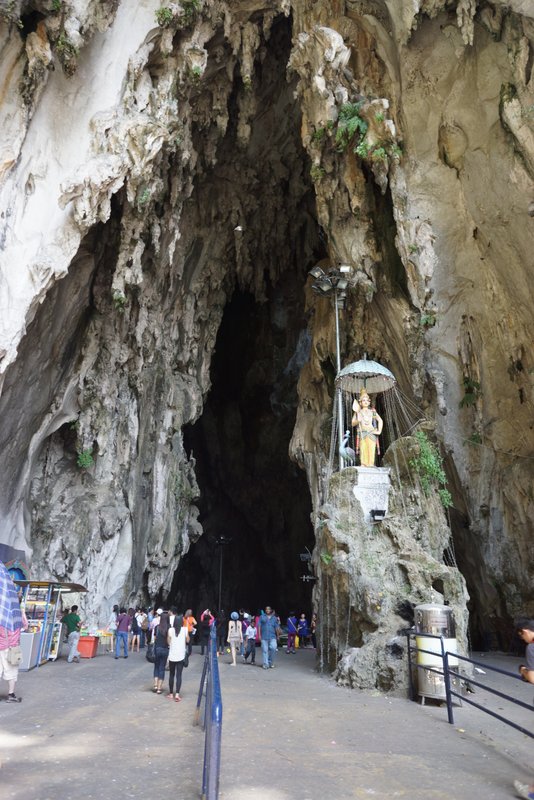 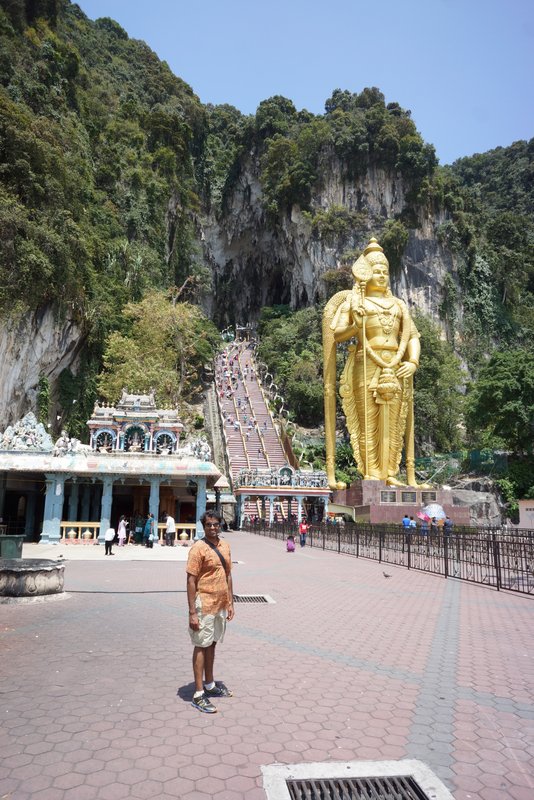 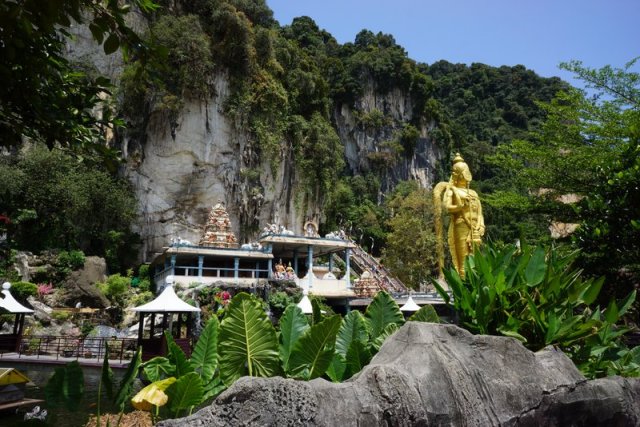 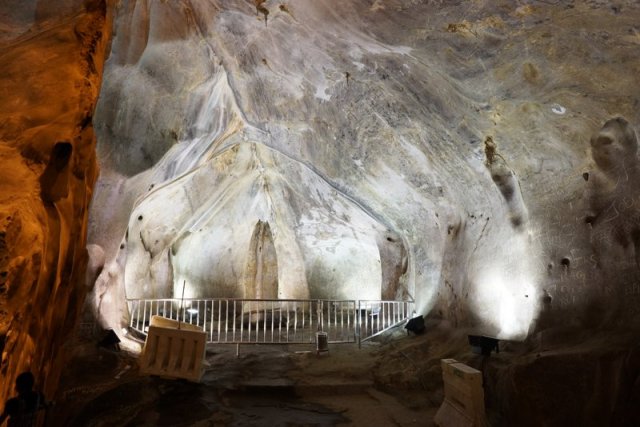 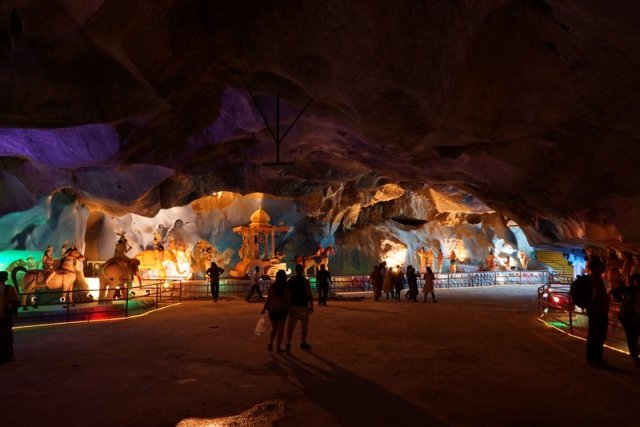 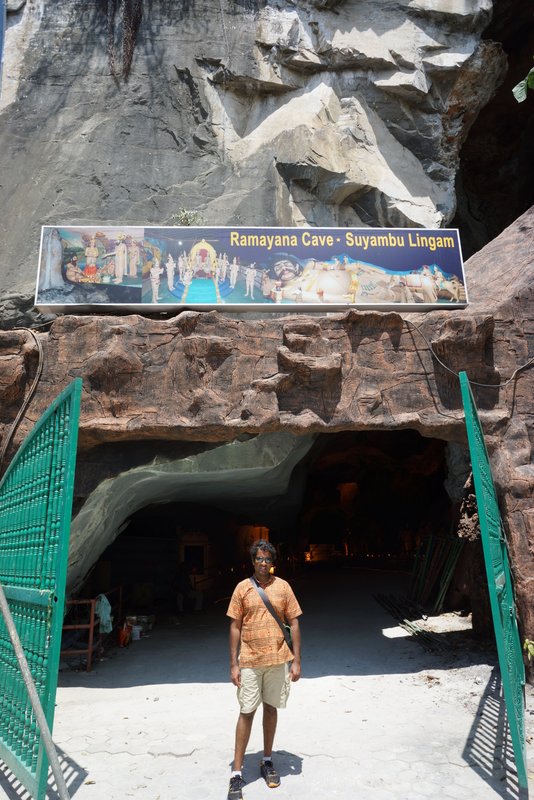